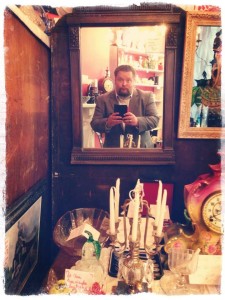 A native of Louisville, Ky., Ryan figured out early on he wasn’t going to play football in the NFL. So he thought writing about sports might be the best way he could think of to fake working for a living. He went to school for journalism at Western Kentucky University (currently the No.1-ranked j-school in the country), and before he graduated (five and a half years later) he’d earned a national Hearst award for feature writing, become editor of the school newspaper and was named a USA Today Academic All-American (honorable mention). He worked in newspaper offices from Cadiz, Ky., to Washington D.C. and had a lot of fun along the way.

He has walked the back nine with Tiger Woods, partied with Lebron James in New York and watched Kentucky basketball with Ashley Judd. He’s hunted for ghosts in Civil War mansions, screened a movie with Cameron Crowe and interviewed Klan members while eating fried Twinkies at the Mississippi State Fair. He’s made bets at the Kentucky Derby with Gilbert Gottfried, shared bootcamp quarters with our nation’s finest National Guardsmen and women, and earned the Honorable Mention honors in the 1992 Topps Magazine Design a Baseball Card contest.

He is currently a writer and instructor for Xavier University, where he focuses on recruiting and retaining students. (resumé here). Previously, he has served as an editor and instructor at Northern Kentucky University, where he wrote for the website, managed the school’s social media networks and warped (ahem, molded) the young minds in the journalism and English departments. He is still continuing his own education. After earning a Master’s in English from NKU (with an emphasis on nonfiction creative writing) he officially became a Wildcat when he was accepted into the Educational Policy and Evaluation (EPE) program at the University of Kentucky. He earned his M.Ed. from the College of Education in 2017.

Of course, Ryan also writes books, lists, takes photos, lends his voice to a podcast or two, and freelances for local websites and magazines. He is a former Cincinnati Enquirer reporter and columnist, and for three years he covered UK basketball for a fan blog for NKY.com.

His current love, other than his family, is for Funko Pop collectibles and his latest freelancing gig, traveling across the country for Ripley’s Believe It Or Not!

Ryan is the author or co-author of six books, including: Game of My Life Kentucky: Memorable Stories of Wildcats Basketball; Wrestling Reality: The Life and Mind of Chris Kanyon, Wrestling’s Gay Superstar; the statewide bestseller 100 Things Wildcats Fans Should Know & Do Before They Die, and Fightin’ Words: Kentucky vs. Louisville. His short stories, poetry and nonfiction have been featured in literary journals and collections across the country. But he knows he will never be more famous than these other Ryan Clarks.

He lives in Northern Kentucky with his wife, their two children, and their two cats.

He’s working on his next project right now.

So shh. Give him some quiet.