Every now and then, co-author Joe Cox and I participate in a mildly successful podcast. We talk sports, literature, music and pop culture. Sometimes we even agree on stuff. Back in 1998, we met across the hall at Rodes-Harlin Hall at WKU. Hence, Rodes Less Traveled. 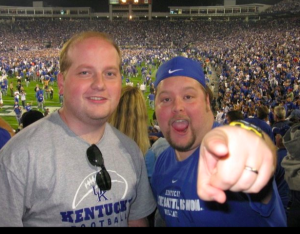 Ryan & Joe in Owensboro with guest Jarrod McCarty. We talk hoops and football and all the miscellaneous stuff that goes with it.

Hijinks follow, because they always do in the home of Kentucky barbecue, the O-boro. (Sept. 6, 2014)

Joe and Ryan podcast on the heels of the Southern Kentucky Book Fest. They discuss UK’s returning players and the 2014-15 team, as well as the Book Fest, books, baseball, barbecue, and probably other things that start with the letter “b”. Who knows.

Podcasting from the first annual Initial Lincoln Book Festival in Stanford, Ky. This week, Joe and Ryan do a segment ranking (and discussing) the greatest shots in UK basketball history. After two brief breaks to sell books (not actually included, but if it’s a little jumpy in the middle, that’s why), we go in a different direction and discuss ’90s music. Joe says something fairly tasteless about Nirvana and otherwise thumps a couple of ’90s sacred musical cows. Ryan is disbelieving. Hijinks follow, because they always do, especially in Stanford. (April 15, 2014)

Ryan and Joe discuss the 2014 NCAA Tournament performance and the outcome of Episode 2′s predictions. They wonder which UK Wildcats will stay and which will go. Joe calls Rex Chapman “kind of a pain in the butt” and future RLT appearances are discussed. Hijinx follow, because they always do. (April 10, 2014)

Joe and Ryan return to talk about the NCAA Tournament. Get our picks, our sleepers, and speculations on whether Embid’s Back would be a good band name, as well as a list of stereotypes that are applied to white basketball players. It’s fun for the whole family and it’s March-tastic.

Joe and Ryan are long-time friends and co-authors who will talk everything from sports (mostly with a Kentucky slant) to books and movies to underrated musicians. In the first episode, Joe and Ryan talk about the upcoming 2014 NCAA Tournament and what they’ve been reading lately. Check back for more episodes!