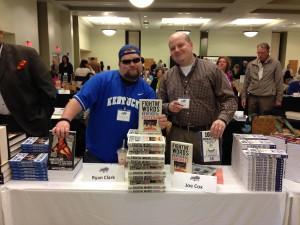 For three years I wrote a fan blog covering the Kentucky Wildcats basketball team for The Cincinnati Enquirer. It was the greatest gig ever. I started when Calipari was hired in 2009, and other than the travel, the hours and the few schillings I got paid each month, it was a blast, culminating in the school’s eighth national title in 2012.

After that, I and the Enquirer parted ways, but the blog still lives online. I have to thank my editors and peers at the Enquirer for the opportunity, as it led to access I never would have gotten elsewhere. It helped me write several other books and stories.

Here are a few of my favorites moments from the blog:

UK survives thanks to Knight; UofL bows out

FOUR all the marbles!  Cats return to national semifinals

Kidd-Gilchrist plays hero over UofL; Ashley and I share a laugh

Dream Game in Final Four was everything and more

Gr8ness for UK!  Eighth title is a like a dream