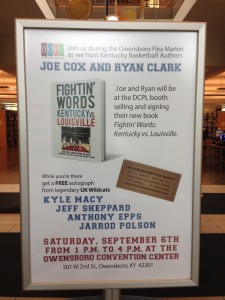 In this turbulent ride through the often-unrewarding world of pro-wrestling, the late Kanyon, who committed suicide in 2010, offers a picture (with freelancer Clark) into the unstable mind of an aspiring wrestler burdened with much more than worries about how best to bulk up on muscle. Kanyon, born and raised in Sunnyside, Queens, knew from an early age that his dream in life was to wrestle—and that he was gay. Kanyon’s love for the sport only increased, and he practiced throughout college while studying to be a physical therapist. Deciding to pursue wrestling after college, Kanyon traveled from state to state, floating between different wrestling circuits, gyms, and trainers. He constantly strived to find a middle ground, a comfort zone, where he could be himself in the real world, as a gay wrestler, and in the wrestling world, taking on a gay wrestling “identity.” Kanyon’s memoir is a candid, honest look into a little-discussed aspect of wrestling. (Dec.)

“Kanyon is brutally honest about the wrestlers he meets, his decision to take steroids, and exploring his sexuality.” —www.unshelved.com (December 2011)

“[I]n-depth, honest and touching. It is not only the best biography that I have read on a wrestler, it is one of the best biographies I had read ever . . . period.” —www.BookLegionDotCom.blogspot.com (December 2011)

“[T]he book is fascinating, both as a look at Kanyon personally and a trip through his wrestling career.” —www.BleacherReport.com (November 2011)

Interview with me about the book and Kanyon

Joe Babinsack looks at Wrestling Reality: The Life and Mind of Chris Kanyon

Overall… I thought this was one of the best biographies/memoirs that I’ve read. It opened my eyes to a different side of wrestling, really gave me a great understanding of what he was up against as a gay man in that industry. It made me a little angry that he was treated the way he was. If you enjoy reading about the world of pro-wrestling or are interested in the life of Chris Kanyon, I would highly recommend this book! I give it a B+!

Review date:  11/07/2011
Reviewer David  Bixenspan
Full review
The Bleacher Report posted a positive review of Wrestling Reality: The Life and Mind of Chris Kanyon, Wrestling’s Gay Superstar. Reviewer, David Bixenspan, called Wrestling Reality “fascinating, both as a look at Kanyon personally and a trip through his wrestling career” and gave it his “highest possible recommendation.”

By Louie MMA – October 17, 2011
I have read nearly every pro wrestling autobiography ever written and can safely say that this book is unique from all. Most books will take you along for a wrestler’s journey from childhood to the major leagues. Kanyon does it vividly. Most share insight into their run in the major leagues- Kanyon does it with more insight. A major theme throughout the book is Kanyon’s struggles with his sexuality. He vividly provides insight into the struggles that he dealt with, tragically leading to his untimely demise. Due to the mature themes on sexuality and suicide, the book is probably best left to those over the age of 18.

By Michael J. Passariello – October 25, 2011
I had the pleasure of knowing Kanyon for his entire life. All I have to say is this: This book is not a work, it is the true story.

By JacPo – February 7, 2012
I’ve been a wrestling fan my entire life and when it comes to autobiographies I tend to favor those written by wrestlers who are not currently under contract and have nothing to lose by telling the truth. The story of Chris Kanyon is unlike any I’ve ever read. Because we know how it eventually ends we know it’s bound to be more honest and from the heart than most. Towards the end of the book it was obvious, to the reader, that Chris had nothing to gain or lose in writing this.

As a fan, I was able to read the story, with Chris’ voice in my head. His story is absolutely beautiful. All in all Chris was a boy with a dream of being a professional wrestler. He had a full understanding of paying his dues and doing what it took to make it to “The Show”. Sadly his dream involved an industry full of self-conscience macho men as well as the man who ruled the wrestling world with his ego. Unfortunately, Chris sacrificed learning who he was as a gay man and enjoying his life, to pursue becoming a wrestler. This book is very well written. The reader is able to envision the reading; whether they are a wrestling fan or not. As you read you’re able to reference the stories through youtube, including Chris’ lowest point in the business he loved. The reader is able empathize with Chris; feeling his highs and lows with every word. This book has the ability to change the way the reader views everyday life as we should learn to appreciate it more.

I just ordered this book after the long awaited release.

I was probally the biggest Mortis/Kanyon fan on earth.To this day I still have his Alliance framed MVP shirt and various autograped promo pictures hanging on my wall.Kanyon was one of the hardest working,most talented wrestlers of the last decade.His in ring work was second to none.Nobody could sell a move or put over his opponent better than Kanyon.No one could come up with new never before seen maneuvers or innovate like Kanyon.Unfortunately due to politics in wCw and WWE he never was given the break/push he needed to become one of the truly elite.Its too bad how it ended.I just want to say thanks to Ryan Clark for putting this book out,so his words can be heard by the masses.I always told Chris he needed to write a book about his life.

The book was published after Kanyon’s suicide, which makes it somewhat morbid but Ryan Clark’s writing quickly gets past that and it’s like Kanyon is alive and telling the story of his life right there in front of you. It is an interesting study of the macho world of pro wrestling meeting issues of homosexuality and the coming out process. His stories of growing up in New York reminded me of my own youth-hanging out with friends, drinking beer, playing ball, breaking curfew, going to the matches. But he did this all with a secret and a burden that no doubt effected him later in life. There are not as many “road stories” as most wrestling books but by the time he made it big there were only 3 territories and the business was shrinking. Overall much different than the other wrestling books I’ve read and you need to go into it with an open mind. While it will appeal to wrestling fans and maybe gay people this book is really about the struggle to live in conflicting worlds when you love (and hate) aspects of both.

By Kenneth A Morey – April 23, 2013
I have always loved wrestling, and Chris Kanyon, I thought the book was really well written and really enjoyed it.

By T. C. Norman – February 19, 2012
Wrestling Reality: The Life and Mind of Chris Kanyon Wrestling’s Gay SuperstarThis book opens with one of the most haunting and uncomfortable prologues I have read in a long time. The journey Mr Klucsarits takes through the world of wrestling, his struggles with his mental health, and his need to hide from his own reality and sexuality strikes a loud call for greater freedom, and for the end of the mindless fear and hatred of gay people. His fear of rejection, and his felt need to hide from those he loved, and who loved him, is a call to all of us, gay and straight that it is time to deal with our own fear of who or what we are or may be. The institutionalized hatred and rejection of gay people under the guise of religion, is not unlike the call in the 1950’s by many of the churches for the continued discrimination of blacks It is mindless, and it is not in keeping with the message of faith.

The pain, and ultimately death, of even one man, out of fear and self loathing is too much to be permitted to be continued or condoned. Mr K’s mental health issues were easily treatable, with meds, and with some therapy, yet the constant fear that he was not good enough, or not worthy to be accepted, or able to be ridiculed by the mastodons of the WWE led in large part to his death. The need to one man to prove himself better than another by acts of ridicule, cruelty, or the need to prove his manliness by domination reveals only how small and insecure that man must be. His wealth might be great, and his ego massive, but his heart and soul are clearly lacking.

Wildcat Blue Nation loves it, too