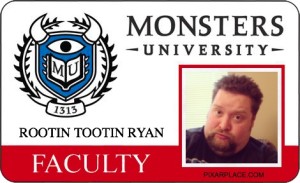 I’ve been teaching at NKU since 2010, and have been fortunate to be able to try a few different subjects, from University 101 (Intro to College) to classes in English and Journalism. Also, I’ve gotten some nice reviews on RateMyProfessor.com! Now, I’m honored to say I’ll be teaching here at Xavier in the fall of 2016.

2005: Intern for Pulitzer-winner Rick Bragg, contributed to New York Times bestsellers The Prince of Frogtown and The Most They Ever Had.

2011: Short story “The Last Toy Run” published in The Journal of Kentucky Studies

2012: Began reading/giving notes on manuscripts for University Press of Kentucky.

For six years I wrote a weekly column called “Folk Tales” for The Cincinnati Enquirer, where I recognized people in the community, and I am a regular contributor to about.com (as the Cincinnati Bengals expert), Northern Magazine, Cincy Magazine, NKY Magazine, KentuckySportsRadio.com, and Kyforward.com.

– Was a featured speaker at the 2013 World Human Rights Conference in Antwerp, Belgium. Presented, via video, on the topic of gay athletes in America, while discussing my book, Wrestling Reality.

– Books by the Banks, 2014, Sportswriting panel